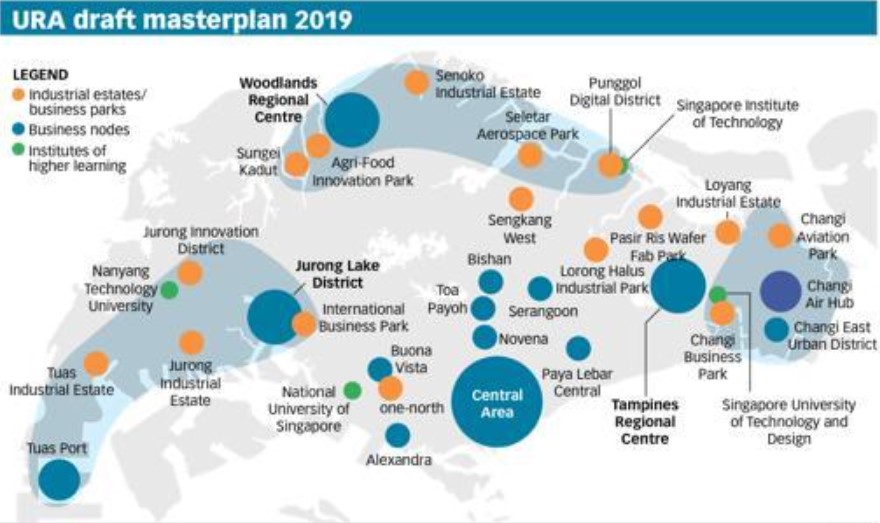 STATE planners unveiled a scheme on Wednesday to try to make "work- live-and-play" more of a norm throughout the currently office-dominated Central Business District (CBD), which is likely to get developers crunching their numbers for possible redevelopment.

Minister for National Development and Second Minister for Finance Lawrence Wong announced the CBD Incentive Scheme at the launch of the Draft Master Plan 2019.

He commented: "Even though (the city center) is the most developed part of Singapore today, we have to continue to rejuvenate our city centre to keep it competitive and vibrant. "We hope this incentive will encourage property owners with older buildings in the CBD to consider rejuvenating their buildings," he added.

Parts of the CBD such as Anson Road, Cecil Street, and Tanjong Pagar will offer an increase in gross plot ratio (GPR) for the conversion of existing office developments to the hotel and residential use, subject to certain qualifying conditions.

Moray Armstrong, managing director of CBRE, said: "The CBD incentive programme could unlock much value by enabling developers to reposition and repurpose obsolete office stock. In land-scarce Singapore, we cannot afford to have entire precincts dedicated to a single usage defined by official working hours."

Christine Li, senior director and head of research for Cushman & Wakefield, said: "This could potentially cause Grade A CBD office rents to rise further as supply is taken off the market. Nonetheless, there could be positive outcomes as some companies would shift out of the CBD, which is in line with the government's decentralization strategy of commercial activities."

Still, executive director of ZACD Group Nicholas Mak said the number of existing building owners who will take up this scheme could be limited as owners have to factor in costs of redevelopment, and the loss of income during the construction period.

Add to the scheme, URA also wants to increase the Central Area's live-in population and is planning for homes in Downtown, Marina South and Rochor. URA spokesperson said: "There are over 50,000 dwelling units within the Central Area today. There is potential to inject over 20,000 more homes to offer a greater variety of housing choices in the city."

In addition, Marina View is a new mixed development project in the Central Business District (CBD), which is well-located at the intersection of Union and Sheton Way, District 1, Singapore. This project is expected to be developed into high-end commercial retail, office, hotel ...

Marina View Residences will become one of the valuable real estate projects in District 1. This is a profitable investment and will be your valuable asset. Please Contact Us to see clearly its potential and get attractive options!

From Wednesday, the Strategic Development Incentive Scheme (SDI Scheme) will also allow building owners and developers islandwide (strategic areas such as Orchard and Downtown encouraged) to request deviations from existing planning parameters, should they have plans to transform their precincts with innovative ideas.

Greater utilization and efficiency of core areas here appeared to be a core theme in the Draft Master Plan, CBRE notes. Its head of research for Singapore and South-east Asia, Desmond Sim, said it was encouraging to see bottom-up flexibility as seen from the SDI scheme, as he observed URA has been traditionally stringent in how land should be developed here.

A CDL spokesperson said of both schemes: "We welcome the incentives and will explore tapping on them for some of our existing developments."

"With the newly introduced incentive schemes to intensify land use, CapitaLand will look into how we will work with the authorities to create a more vibrant city-state."

Elsewhere, rejuvenation of several mature areas will take root in places such as the Queenstown area, Buona Vista, Beauty World and Sungei Kadut which are all near the 24-kilometer Rail Corridor. The green spine will be largely connected by 2021, and about one million people will live within one kilometer.

Mature estates such as Farrer Park and Dakota Crescent will also get new housing. Familiar landmarks like the Farrer Park swimming pool and former boxing gym will be retained after the authorities had engaged with residents about the area's sporting heritage. 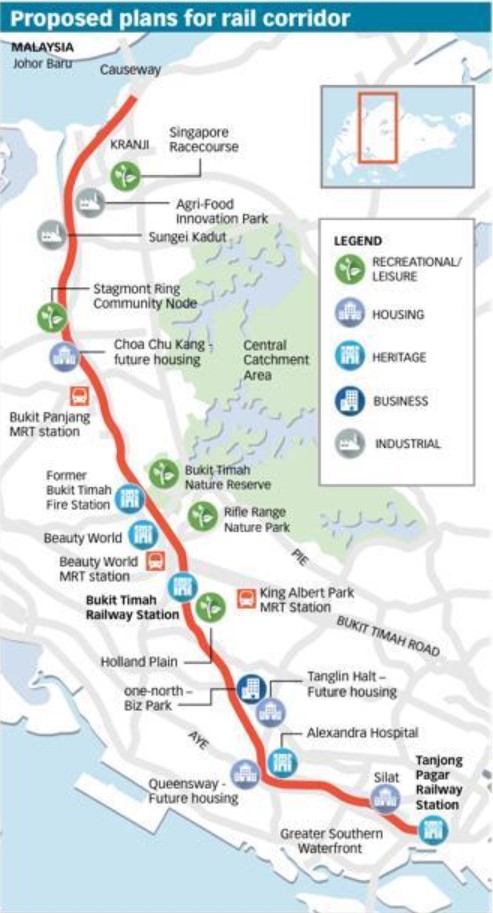 Those plans show that the URA will not neglect the existing built environment even as they plan and execute on future growth areas. Three major economic gateways, to the East, North, and West have already been identified. There will also be a new Dover Knowledge District, a mixed-use site which is meant to be an extension to one-north.

Ms.Li of Cushman & Wakefield noted that that could be more suited to technology companies, as they prefer a more campus-like environment. As for new housing precincts, there will eventually be 42,000 housing units in Tengah, 4,000 in Kampong Bugis, and 10,000 in Bayshore, the URA spokesperson said.

For the upcoming Greater Southern Waterfront - spanning more than 2,000 ha, and about six times the size of Marina Bay today - development works for some parts will start in the next five to 10 years. The former Keppel Club site will become a new residential precinct, and the old Pasir Panjang Power District will be turned into a heritage and lifestyle hub.

The site of the Paya Lebar Airbase - larger than the size of Bishan or Ang Mo Kio town - will be transformed starting after 2030. One early idea is that the airport buildings and parts of the runway could be repurposed into community spaces, and the area could provide mixed-use neighborhoods and green spaces.

Minister Lawrence Wong said: "It will help coordinate planning of infrastructure, storage, and utilities so that together with building owners and developments, we can see what more can be done below ground, so that precious surface land can be freed up for more important uses."

Economist Song Seng Wun told BT that put together, aspects like the continued boost in greenery across the island and the continued decentralization will continue to build on Singapore's already high liveability.

He said: "As we move forward into the next 50 to 100 years, our country is aging, so attracting more people to live and work here will continue to be important."